Over one hundred individuals testified for over four hours about the fate of public monuments that, at the behest of the mayor of the City of New York, Bill De Blasio, are being reviewed by a commission established by the mayor, may be relocated or augmented with clarifying contextualization due the offensive nature of the individual being commemorated. The audience urged the removal from Central Park of a statue of J. Marion Sims who operated without anesthesia on slaves in order to find a surgical treatment for fistulas, in addition to an Equestrian statue of Theodore Roosevelt from the Museum of Natural History's Central Park West entrance.

It is remarkable that in four hours of testimony on the subject of iconoclasm, only the moderator the Commissioner of Cultural Affairs, Tom Finkelpearl at the beginning and I at the end referenced actual removals in New York City. Finkelpearl mentioned Civic Virtue 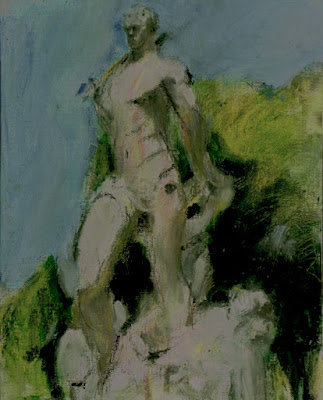 and I discussed Tilted Arc [this is the empty plaza across from where I testified that was once the home to Tilted Arc. 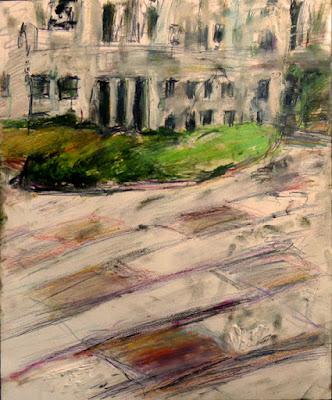 My name is Howard Skrill, I am an artist/educator and my work consists of plein air drawings and paintings of public statuary throughout New York City for my art project, the Anna Pierrepont Series. The images are then combined with words into pictorial essays that explore the erasure of public and private memory including historical and contemporary iconoclasm as with the removals of bronze portrait busts of Robert E. Lee created by George T. Brewster and Thomas Stonewall Jackson created by Bryant Baker overnight from the Hall of Fame for Great Americans on the campus of Bronx Community College in response to the murderous violence of Charlottesville and the equivocation of politicians on the federal level.

I want to transport you back to March 7th, 1985 to an ornate hearing room in a building that can be seen from the windows of this building. I remember myself as an undergraduate art student at a suburban public college, leaning over a banister and observing over a hundred and twenty people testifying in support of the artist Richard Serra and his massive Cor-ten steel sculpture Tilted Arc that was targeted for removal from a public plaza in front of the International Trade Court across from Foley Square just across the street from here.

I and my fellow students were transported by our faculty in order to show support for Serra who many in our community believed was being persecuted by the federal government that insisted, ultimately successfully, for the work's relocation which turned out to be its destruction.

Many rushed to the barricades that day to stand in Serra’s defense. Over one hundred people, representing the elite of the New York art world spoke against the removal with some arguing that artists and artworks needed protection against political forces from the other side of the barricade that would target artists to achieve political aims.

It is fair to ask this committee whether Tilted Arc’s defenders are fulfilling the perhaps dangerous precedent established in the Tilted Arc trial by manning the opposite side of the barricade that its detractors once occupied.

I only ask this to illuminate that battles over public monuments coincide with the rise and fall of political factions. Many of us believed that the treatment of Serra violated his rights as an artist. It is fair therefore to ask if the very act of monument removal impinges the very rights we championed for Serra. If we set aside the principle we fought so strenuously to preserve when we were in the opposition, we may wish, if the political winds shift again, that we had held more tightly them now that we are the arbiters of the fates of these monuments instead of sacrificing them to expediency.
Posted by Howard Skrill at 3:11 PM 1 comment: 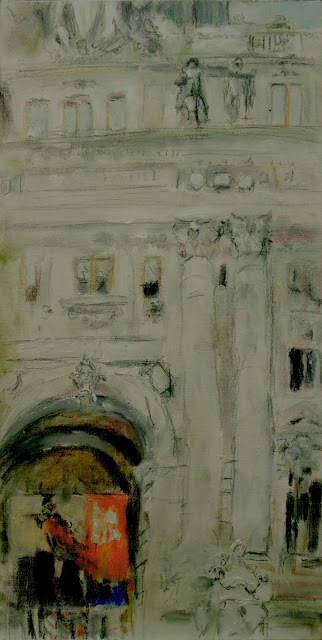 I am thrilled and deeply honored to be showing with Bob Hagan, Rich Garr, Cynthia Ruse and Sherry Davis at Chocolateria

with the works remaining on display after the conclusion of the Open Studios.

The proprietor of Chocolateria, working with Rich Garr who spearheaded our exhibition, has graciously offered her wonderful coffee bar for our exhibition and reception.

The Open Studios were featured in an article of things to do for the weekend of Nov. 18-19 in the New York Times authored by Jonathan Wolfe!

Many of the artists of the Park Slope Windsor Terrace Group, particularly Joy Makon, Nancy Doniger (our President), Rich Garr, Bob Hagan and others have volunteered tirelessly to make the Open Studios a success. I owe a debt of gratitude to the extraordinary artists that are also my friends and colleagues.

Given the topical nature of the exhibition and my choice to include contested statuary in it after exhibiting works specifically targeted for iconoclastic attacks 'Heads have Rolled' at the Boathouse Show for the Gowanus Open Studios in October 2017, I reorganized my pictorial essay on public statuary and liminal that appeared in the Columbia Journal for Monu-Moment