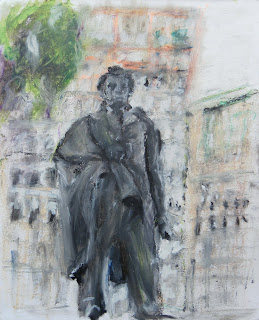 The drawings posted in this series, the Anna Pierrepont Series, were created as I wandered NYC. I carry a folding chair and materials that can fit into a paint smeared backpack. The works are drawn from statuary that I have come upon in my wanderings. The pictures are created, usually on site, through a visual interaction between myself and the work that I render. I did not start this project with any specific intent, I was inspired by my intense love of the challenge of representation. The statues were selected in the time honored academic tradition of drawing statuary, due to their static nature. The sculptures I rendered, in time, began to be selected for representation due to their inherent poignancy.

I came to realize staring at a statue of a historical figure, monument to the dead at a cemetery, religious sculptures in churches and/or museums or adorning 18-19th century buildings, that the works are uniquely declarative.

If a figurative sculpture is commissioned and put in some random corner of the world, even if it is forlorn or forgotten, the method of creation and the iconography of the work speaks volumes on how the Patron (and artist) saw him/herself in relation to his/her life and times or how a society viewed itself.

Some of the works I draw are extraordinarily odd in the ideas they articulate through their subject matter choices. They can reveal sanctimonious or deeply prejudicial world views, that were so deeply ingrained upon execution that they resisted introspection. The worlds evoked by these works can be excruciatingly personal or profoundly perverse. My intrusions into these worlds are profoundly transgressive. I am, after all, an anonymous man carrying a folding chair, with a backpack. And yet, the sculptures endure, interacting perpetually with a world in flux. At some point, I encounter these works in their nooks, unfold my chair, open my backpack, and struggle to translate their appearance into an approximation of crude markings. The results are a product of an imperfect struggle of representation, resulting in images frozen upon fingerprint smeared pieces of industrially manufactured paper.

I call this series the Anna Pierrepont series. Ironically, Anna does not have a statue dedicated in her name. She lies in a grand sarcophagus on a forlorn, forgotten hill in Greenwood cemetery surrounded by the crypts of varied Pierreponts and Jays. I don't know much of Anna Pierrepont's life, but her crypt, enclosed in gothic filigree of an august red sandstone, and surrounded by her familial minions scattered below her, is a fitting moniker for this series of works. I visited her a couple of times, walked around her imperious crypt, curious about her relation to a certain John Pierrepont Morgan and awed by her majestic internment.

Wandering free, stepping over the weeds and loosened stone around her crypt, realizing that while alive, she certainly would have insisted on massive gates to guard her from the likes of me, I appreciate her utter exposure. The insistence on being remembered led to this hilltop crypt and her remembrance. The fact of her perpetual residence, ensures her remembrance, it just does not control how.

The first image is the Great Emancipator, Abraham Lincoln that stands framed against the cast iron and other pre-war buildings of North Union Square. I sat in a wire chair, in a crowded and dirty public seating area and drew this picture during the spring time. An older man approached me, as is common when I work in public, and talked of his artwork, as he observed my effort to capture the changing lights and colors reflecting off the bronze object's surface and emerging from the lights, colors and shades of the surrounding window ledges.

Posted by Howard Skrill at 2:39 PM No comments: