Teetering published on the Blog of Charlottesville's Streetlight 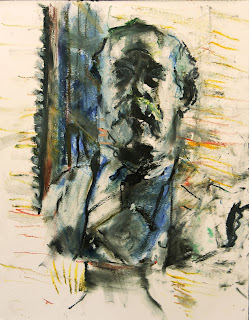 Bust of Robert E. Lee installed in the Hall of Fame for Great Americans on the campus of Bronx Community College in 1900, removed in August 2017 as a reaction to the violence in Charlottesville.

The last bust added to the Hall was Franklin Roosevelt in 1973.

Jackie Robinson to
John F. Kennedy to
Albert Eistein to
Judy Garland (who played Dorothy Gale in the Wizard of Oz and was promised a bust in the Hall of Fame for killing the Wicked Witch)

are not represented with likenesses in the Hall. The last substantative change was the removal of Lee's bust and that of Stonewall Jackson.

In Spring 2017, I submitted ‘Teetering’ to Streetlight, a wonderful arts and literary publication in Charlottesville, Virginia. I included images from the Anna Pierrepont Series [howardskrill.blogpost.com] of figures standing precariously on tall columns and cupolas.

Teetering asked viewers to imagine the figures way up high teetering as a consequence of political upheaval.

Elizabeth Howard, the Arts Editor of Streetlight, suggested that ‘Teetering’ should directly address the pending removal of an equestrian statue of Robert E. Lee that sits in Emancipation Park in Charlottesville.

Then a mob gathered in Charlottesville in ‘defense’ of the monument. Three people died as a consequence including the murder of an innocent person.

Shortly thereafter, teetering statues of Lee and many others nationwide began to topple.

Despite their community reeling from the violence, Elizabeth and her fellow editors of Streetlight worked with me to have Teetering provide a context for the events besieging their community and it is to that community that Teetering’ is dedicated.

For more information on the works included in Teetering, I have created a collection

Thank you
Posted by Howard Skrill at 10:37 AM No comments: