For those that have followed and supported "the Anna Pierrepont Project on the Road" I thank you. The following works were created in NYC during the same period. At home, I have been working on a series of drawings that I consider my whites. I have discovered chalk pastels of such misty effervescence that they literally crumble when held. When I have purchase them, the cashiers need to clean the counter of the traces of light yellow, pale green or off white dust. Since discovering these wondrous materials, I have added them to my arsenal of materials to complement colored pencil, oil stick and oil pastel. I have been seeking out motifs that feature white marble figures against white marble backgrounds, in order to maximize their impact. I know of a few of these motifs that I have returned to repeatedly. One such motif is the statues of George Washington at Washington Square Park. 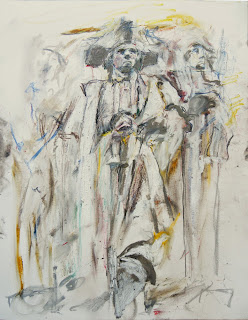 As can be well imagined, drawing in Washington Square Park has unique challenges, many tourists, buskers and one day a parade of Hare Krishnas.

Nestled in a niche in a apsidal chapel of the Cathedral of St. John the Divine, is a beautiful niche sculpture of St. Joan of Arc. The figure is depicted in prayer, with eyes cast down but wearing medieval armor and a sword. 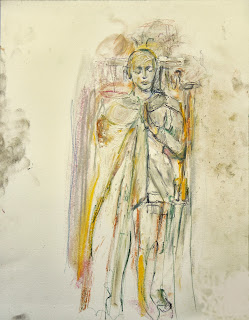 As one enters the path that leads to an entrance to the walking and bike path on the Brooklyn Bridge is an allegorical figure of a woman embracing a young child protectively. 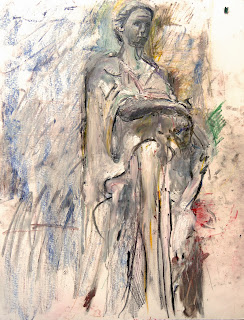 More to come, txs!
Posted by Howard Skrill at 7:19 AM No comments: